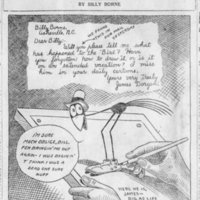 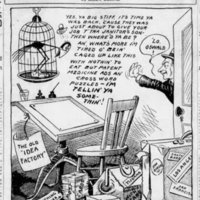 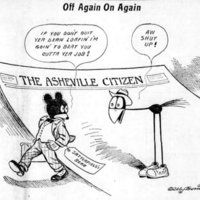 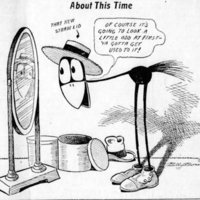 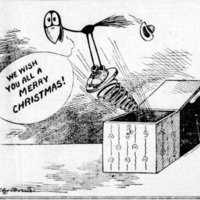 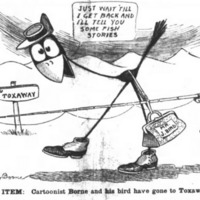 “Bill, where in Sam Hill have you been for tha last week? If yah aint careful, tha editor's gonna give yer job to tha officeboy. And what’s more, I’m gonna strike if I don’t appear on tha front page every day. Do yah get me?”—Billy Borne’s Jaybird (1919)

Starting with his stint at the Kokomo Tribune, Borne's illustrations nearly always featured his signature character-- a small, black, wisecracking bird, often adorned with miscellaneous shoes and hats, and variously referred to as his Jaybird or Oswald.

Quick with a witty comment, the bird would remain a standard part of Borne’s cartoons for most of his career. The character became so well known across Western North Carolina that the post office delivered letters addressed with nothing more than a picture of the bird to the Asheville Citizen offices.

In his last years with the Asheville Citizen, Borne moved away from the character, and a curious public wrote letters complaining about the bird’s absence and asking what happened to Borne’s feathered friend.